HIGH-END DESIGN AND REDUCTION OF TOTAL COST OF OWNERSHIP 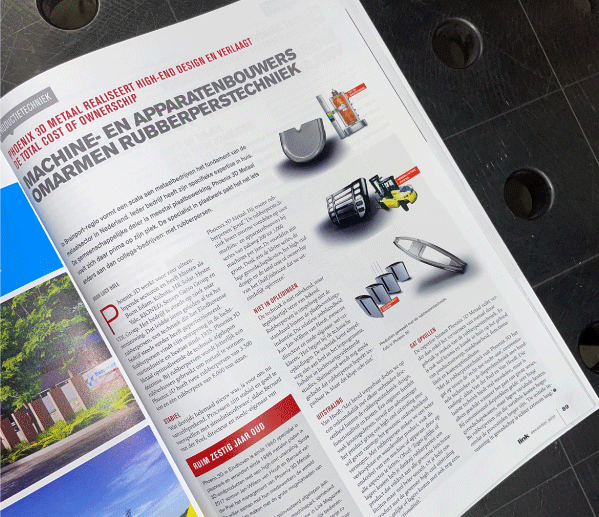 MACHINE AND EQUIPMENT MANUFACTURERS EMBRACE RUBBER PRESS TECHNIQUE
In the Brainport region, a range of metal companies form the foundation of the metal sector in the Netherlands. Each company has its own specific expertise in-house. The common denominator is usually sheet metal working. Phoenix 3D Metaal fits in perfectly. The specialist in sheet metal works does things slightly differently to other companies: with rubber presses.
By Lucy Holl

Phoenix 3D works for a wide range of industries for customers such as Boon Edam, Kubota, HR Solar, Hyster Yale, RIONED, Sensys Gatso Group and VDL Groep. The company is always looking to innovate. Years ago, this led to rubber pressing, a technique that the Eindhoven-based company has increasingly perfected. Rubber presses originate from the aviation industry and have existed since 1935. Phoenix 3D Metaal has optimised the technique over the past decades. In rubber presses, a rubber cushion is literally used to form metal. Phoenix 3D has two 3,500 tonne rubber presses and one 8,000 tonne rubber press.

STABLE
‘What was once a complete novelty, is now a matter of course for us. Processes are stable and easy to predict with simulation software’, says Bernard van der Poel, director and co-owner of Phoenix 3D Metaal. He refers to rubber presses as ‘gold’. ‘The rubber press technology offers enormous advantages for machine and equipment manufacturers in series of around 200 to 3,000 machines per year. The benefits are significant. Think of the small series, the low tool costs, the high-end design and the total cost of ownership of the (semi)product that we ultimately deliver.’

NOT INCLUDED IN TRAINING COURSES
The technique is not unknown, but at the same time far from being widely known. Rubber presses are simply not the standard in the sheet metal processing industry. Jan-Willem van Hooft, director and co-owner, can explain this relative unfamiliarity. ‘It all starts with technical training. The technique is simply not covered in the curriculum, except in aeronautical studies. There is still a dormant belief that rubber presses can only be used to a limited extent. But nothing could be further from the truth.’

APPEARANCE
Van Hooft: ‘With broad applicability, we aim at an inseparable trinity within rubber press technology: design, functionality and costs. An engineer is often cost-driven, while a sales manager would like the product to have a high-end appearance due to the desired distinctiveness. With rubber presses, we create a more saleable and valuable product, often as part of a machine or equipment, by paying attention to all aspects.’ In other words: ‘At equal or lower costs, rubber presses give you a product that meets all the desired functionalities but looks much better. Or you will have a product with the desired high-end appearance at the same or lower cost with even more functionality.’

FILLING A GAP
The expertise at Phoenix 3D Metaal extends beyond the mere shaping of metal by using the rubber pressing technique. There is also a lot of in-house knowledge and expertise in the field of product design, manufacturability, functionality and cost optimisation. ‘With the rubber pressing technique, Phoenix 3D fills the gap between the ‘straightforward’, conventional techniques and the deep-drawing technique with hardtoolings’, according to Van der Poel and Van Hooft. The latter technique offers many advantages, but is only suitable when it comes to large series. With conventional deep drawing, the following applies: very high tool costs, but lower variable costs. In the case of rubber presses, these variable costs are higher because the process times are longer. ‘However, the initial investment in tools is extremely low.’

MORE THAN SIXTY YEARS OLD
Phoenix 3D in Eindhoven has been a specialist in sheet metal work since 1960 and has been transforming metal sheets into 3D end products with a high-end appearance since 1998. Jan-Willem van Hooft and Bernard van der Poel have been managing Phoenix 3D Metaal since 2017. Together with their employees, they want to introduce the world to the many possibilities of rubber presses. Phoenix 3D invested a lot last year. Almost all the machinery was renewed, for example. Van der Poel in a previous interview in Link Magazine: ‘We want to serve our customers as well as possible. It is precisely our investments that keep the product price as low as possible. This is only possible with up-to-date technology, which shows the customer that we can handle any order.’

Phoenix 3D Metaal uses cookies to make the visit to our website by you as a visitor even more personal. Our cookies allow us and third parties to track your internet behavior within our website. This allows us and third parties to adapt advertisements and other content to your personal interests. If you do not agree, we only place cookies to make the website work and to perform analyzes.
Do not allow Allow everything
Manage consent

This website uses cookies to improve your experience while you navigate through the website. Out of these, the cookies that are categorized as necessary are stored on your browser as they are essential for the working of basic functionalities of the website. We also use third-party cookies that help us analyze and understand how you use this website. These cookies will be stored in your browser only with your consent. You also have the option to opt-out of these cookies. But opting out of some of these cookies may affect your browsing experience.
SAVE & ACCEPT